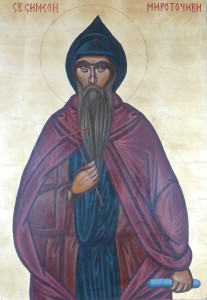 Stefan Nemanja, the great ruler (Great Zupan) of the Serbian people was the consolidator of Serbian lands, creator of the independent Serbian state, defender of Orthodoxy and exterminator of heresy. When Stefan consolidated the State and established the Orthodox Faith in it, following the example of his son Sava, he accepted monastic tonsure in Studenica Monastery in 1195 and received the name Simeon. His wife Anna withdrew to a convent for women, also embraced monasticism and received the name Anastasia. After two years as a monk in Studenica, Saint Simeon traveled to Athos, the Holy Mountain. There he took up residence in the Monastery Vatopedi together with his son Sava. Both spend their days and nights in prayer. There, they built six chapels dedicated to: the Savior, The Unmercenary Saints, St. George, St. Theodore, The Forerunner and St. Nicholas. Father and son purchased the ruins of Hilendar and erected a glorious monastery in which Simeon lived only eight months and then died. When Simeon was on his deathbed, Sava, according to his father’s wish, placed him on a simple mat. With eyes directed toward the icon of the Mother of God and the Savior, the blessed elder spoke these last words: “Let everything that has breath praise the Lord.” (Psalm 150:6), and took up habitation with the Lord on February 13, 1199.