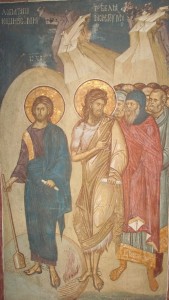 Neither did he direct his footsteps in the wilderness nor away from the wilderness. An invisible rudder from on high steered his life. For when it was necessary for him to depart the wilderness and go out to meet the Lord, it is said: “The word of God came to John” (St. Luke 3:2). As an innocent youth, in this manner John spoke simply about his communication with the powers of heaven: “And I did not know Him [Christ] but the One Who sent me to baptize with water told me, `On whomever you see the Spirit come down and remain, He is the One Who will baptize with the Holy Spirit.’ Now I have seen and testified that He is the Son of God” (St. John 1: 33-34). How tenderly and simply he speaks about heavenly things! How he is as awesome as a lion when he speaks out against the injustice of men, against Herod and Herodias! The lamb and the lion dwell in him together. Heaven is as close to him as a mother is to her child. The will of God is as accessible and clear to him as the angels in heaven.

O Lord, Most-wise, direct the lives of us sinners in the wilderness of this life according to Your will as You directed the life of St. John the Baptist.

To You be glory and thanks always. Amen.

From The Prologue from Ohrid: Lives of Saints by St. Nikolai Velimirovich