Forty days before He was delivered to an ignominious death for our sins, our Lord revealed to three of His disciples the glory of His Divinity.

“Now after six days Jesus took Peter, James, and John his brother, led them up on a high mountain by themselves; and He was transfigured before them. His face shone like the sun, and His clothes became as white as the light.” (Matt. 17:1-2). This was the event to which our Lord was referring when He said: “there are some standing here who shall not taste death till they see the Son of Man coming in His Kingdom.” (Matt. 16:28). By this means the faith of the disciples was strengthened and prepared for the trial of our Lord’s approaching sufferings and death; and they were able to see in it not mere human suffering, but the entirely voluntary passion of the Son of God. 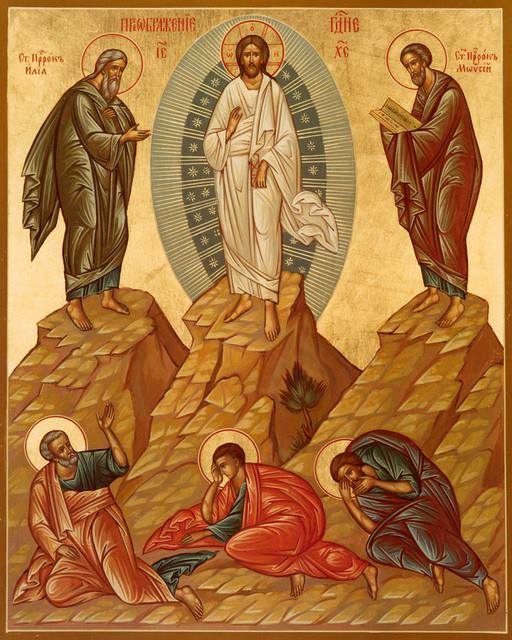 The disciples saw also Moses and Elijah talking with our Lord, and thereby they understood that He was not Himself Elijah or another of the prophets, as some thought, but Someone much greater: He Who could call upon the Law and the Prophets to be His witnesses, since He was the fulfillment of both.

The three parables of the feast concern the appearance of God to Moses and Elijah on Mount Sinai, and it is indeed appropriate that the greatest God-seers of the Old Testament should be present at the glorification of the Lord in His New Testament, seeing for the first time His humanity just as the disciples were seeing for the first time His Divinity.

Orthodox theology sees in the Transfiguration a prefigurement of our Lord’s Resurrection and His Second Coming, and more than this—since every event of the Church calendar has an application to the individual spiritual life—of the transformed state in which Christians shall appear at the end of the world, and in some measure even before then. In the foreshadowing of future glory which is celebrated in this Feast, the Holy Church comforts her children by showing them that after the temporary sorrows and deprivations with which this earthly life is filled, the glory of eternal blessedness will shine forth; and in it even the body of the righteous will participate.

It is a pious Orthodox custom to offer fruits to be blessed at this feast; and this offering of thanksgiving to God contains a spiritual sign, too. Just as fruits ripen and are transformed under the action of the summer sun, so is man called to a spiritual transfiguration through the light of God’s word by means of the Sacraments. Some saints, (for example – Saint Seraphim of Sarov), under the action of this life-giving grace, have shone bodily before men even in life with this same uncreated Light of God’s glory; and that is another sign to us of the heights to which we, as Christians, are called and the state that awaits us – to be transformed in the image of Him Who was transfigured on Mount Tabor.