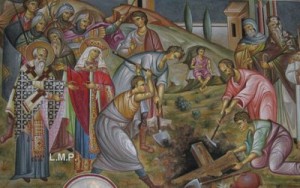 the only one who knew where the Cross was located, and, constrained by the empress, he revealed that the Cross was buried under the temple of Venus that Emperor Hadrian had built on Golgotha. The empress ordered that this idolatrous temple be razed and, having dug deep below it, found three crosses. While the empress pondered on how to recognize which of these was the Cross of Christ, a funeral procession passed by. Patriarch Macarius told them to place the crosses, one by one, on the dead man. When they placed the first and second cross on the dead ma
n, the dead man lay unchanged. When they placed the third cross on him, the dead man came back to life. By this they knew that this was the Precious and Life-giving Cross of Christ. They then placed the Cross on a sick woman, and she became well. The patriarch elevated the Cross for all the people to see, and the people sang with tears: “Lord, have mercy!” Empress Helena had a silver case made and set the Honorable Cross in it. Later, the Persian Emperor Chozroes conquered Jerusalem, enslaved many people, and took the Lord’s Cross to Persia. The Cross remained in Persia for fourteen years. In the year 628 the Greek Emperor Heraclius defeated Chozroes and, with much ceremony, returned the Cross to Jerusalem. As he entered the city Emperor Heraclius carried the Cross on his back, but suddenly was unable to take another step. Patriarch Zacharias saw an angel preventing the emperor from bearing the Cross on the same path that the Lord had walked barefoot and humiliated. The patriarch communicated this vision to the emperor. The emperor removed his raiment and, in ragged attire and barefoot, took up the Cross, carried it to Golgotha, and placed it in the Church of the Resurrection, to the joy and consolation of the whole Christian world.