From time immemorial, the Church has celebrated the Most-Holy Theotokos as the patroness and protectress of the Christian people, Who, by Her intercessory prayers, implores God’s mercy for us sinners. The help of the Most-holy Mother of God has been clearly shown numerous times, to individuals and to nations, in peace and in war, in monastic deserts and in densely populated cities. 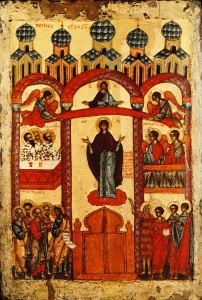 The event that the Church commemorates and celebrates today confirms the Theotokos’ consistent protection of Christian people. On October 1, 911, during the reign of Emperor Leo the Wise, there was an all-night vigil in the Blachernae Church of the Mother of God in Constantinople. The church was full of people. St. Andrew the Fool-for-Christ was standing in the rear of the church with his disciple Epiphanius. At four o’clock in the morning, the Most-holy Theotokos appeared above the people, holding her omophorion outstretched as a protective covering for the faithful. She was clothed in gold-encrusted purple, and shone with an ineffable radiance, surrounded by apostles, saints, martyrs and virgins. St. Andrew said to Blessed Epiphanius: “Do you see, brother, the Queen and Lady of all praying for the whole world?” Epiphanius replied: “I see, Father, and am struck with amazement!” The Feast of the Protection was instituted to commemorate this event, and to remind us that we can prayerfully receive the unceasing protection of the Most-holy Theotokos in any time of difficulty.

Reflection
The Most-holy Theotokos has often appeared to holy men in need: sometimes to encourage them in asceticism, or to heal them from sickness, or to reveal a certain mystery to them. Two similar, wonderful events took place in the Great Lavra on the Holy Mountain. In Great Lent, during the chanting of the Great Akathist, St. John Koukouzelis was tired and sat down, facing the icon of the Theotokos. As he sat, he fell asleep. And just then, the Holy Most-pure One appeared to him in heavenly light and said: “Rejoice, O John! Chant and do not stop chanting, and for this I will not abandon you”. With this, she placed a gold coin in his hand. When he awoke from sleep, the gold coin was still in his hand. After this, many wonderful miracles were worked from the icon of the Theotokos, as well as from the gold coin. The second incident involved St. Gregory the monk, who, like John Koukouzelis, was a church cantor. Patriarch Kallistos had established that in the Liturgy of St. Basil the Great, “All Creation Rejoices in Thee” be sung in place of “It Is Truly Meet.” His successor, Patriarch Philotheus, rescinded this, reinstating “It Is Truly Meet” because of its brevity. But then, on the eve of the Theophany, and in the presence of Patriarch Gregory of Alexandria, St. Gregory sang “All Creation Rejoices in Thee” instead. Immediately after this, the Holy Most-pure One appeared to him, and, as she had done to John Koukouzelis, placed a gold coin in his hand. She said: “I am very grateful for your singing in my honor.” Because of this, it was instituted that all Liturgies of St. Basil would thereafter include “All Creation Rejoices in Thee.”