A great son of the Orthodox Church, King Milutin saved the Balkans from Uniatism. At that time in history when the Byzantine emperor’s conscience was weakened, this noble and God-bearing Slavic king rose up decisively and, with God’s help, saved Orthodoxy and not only in his own land, but also in all the lands of the Balkans. 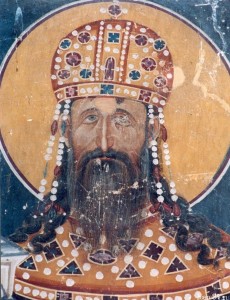 Everyone who closely examines the life of the holy King Milutin will understand why God gave him success after success in all his works throughout his life. When Milutin ascended the throne, he immediately vowed to God that he would build a church for each year that he would reign. He reigned forty-two years and built forty-two churches. Next to some of the churches-for example, in Thessalonica and Constantinople-he also built hospitals for the indigent, where the poor would receive everything free of charge. Beyond that, he especially loved to give alms to the needy from his own enormous wealth. Oftentimes, this powerful and wealthy king dressed in the clothes of a poor man and, with two or three of his servants, walked among the people at night and asked about their misfortunes, and gave to them abundantly. He lived a very simple, familial life, even in the midst of his great wealth-though he never seemed that way to foreigners. He had become accustomed to a simple life while still at the home of his father, King Uro I. It is told how Emperor Michael Palaeologus sent his daughter Anna with a retinue to the court of King Uro , as an offering to Milutin, in order to lure the Serbian king into union with Rome. But King Uro , seeing the foolish extravagance of the princess and her retinue, said: “What is this, and what is it for? We are not used to such a life.” And pointing to a Serbian princess with a distaff in her hand, he said: “Behold, this is the kind of clothing we expect our daughter-in-law to wear.”