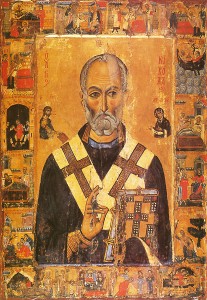 In icons of Saint Nicholas, the Lord Savior is usually depicted on one side with a Gospel in His hands, and the Most-Holy Theotokos – on the other side with an episcopal omophorion in her hands. This has a twofold historical significance: first, it signifies the calling of Nicholas to the hierarchical office, and second, it signifies his release from the condemnation that followed his confrontation with Arius.

St. Methodius, Patriarch of Constantinople, writes: “One night St. Nicholas saw our Savior in glory, standing by him and extending to him the Gospel, adorned with gold and pearls. On his other side, he saw the Most-Holy Theotokos placing the episcopal omophorion on his shoulders”. Shortly after this vision, John the Archbishop of Myra died and Saint Nicholas was appointed archbishop of that city. That was the first event. 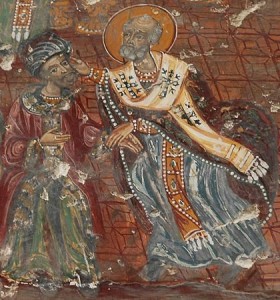 The second event occurred at the time of the First Council in Nicaea. Unable to stop Arius through reason from espousing the irrational blasphemy against the Son of God and His Most-Holy Mother, Saint Nicholas struck Arius on the face with his hand. The Holy Fathers at the Council, protesting such an action, banned Nicholas from the Council and deprived him of all emblems of the episcopal rank. However, that same night, several of the Holy Fathers saw an identical vision: how the Lord Savior and the Most-Holy Theotokos were standing around Saint Nicholas – on one side the Lord Savior with the Gospel, and on the other side the Most-holy Theotokos with an omophorion, presenting the saint with the episcopal emblems that had been removed from him. Seeing this, the fathers were awestruck and quickly returned to Nicholas all that had been removed. They began to respect him as a great chosen one of God, and they interpreted his actions against Arius not as an act of unreasonable anger, but rather an expression of great zeal for God’s truth.